So the Imperials have recognized the rebel hero Peter Mayhew  in his disguise. On his way home from a Sci Fi Convention he was stopped by Airport Security. Headed through the airport he was stopped by security and they seized his cane, which is a likeness of a lightsaber, thinking it to be a dangerous weapon. Now, if this were really Star Wars, then yah, they’d be correct but it was just a cane that helped this wookie walk, so you can imagine the frustration of Peter Mayhew as he waited for them to return his cane. He reported on Twitter:

“Won’t allow me through the airport with me cane! Giant man need giant cane. Small cane snap like toothpick. Besides, my lightsaber is just cool. I’d miss it.”

He continued to tweet: “@AmericanAir won’t allow me through the airport with me cane! Can I get a retweet?”

Now, the power of the force was with him, as well as fans on Twitter. After many retweets, the TSA staff at the Denver Airport realized that it was not as dangerous as it looked and allowed him to move along.

Peter tweeted: “Magic words to TSA are not please or thank you, it’s Twitter. Cane released to go home.” 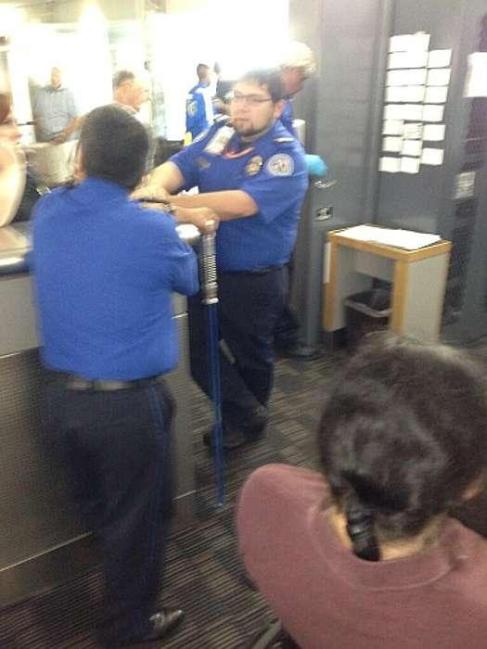 So the advice to all who dare go against the wookie, remember C3P0’s famous words. “Let the Wookie win.”