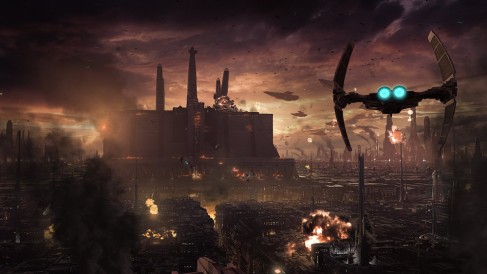 When people hear the words “Star Wars” there is rarely any confusion as to what it is. Many know that it is a huge film that has a lot of fans. Even if you haven’t seen Star Wars (if you haven’t, you should stop reading and go watch them right now) the name is familiar. Films and TV Shows have incorporated Star Wars parodies and phrases into their shows since the release of the original trilogy.

So with the new movies coming out, it’s not a surprise that Disney will want to move forward into bigger things. The Star Wars action figures and other toys are still one of the biggest franchises out there and are expected to grow. Even if you haven’t grown up in the Star Wars culture of collectibles, Disney is expected to reach all demographics with the new films.

When asked if Disney was worried that today’s kids may not be familiar with the films, Rasulo touted the strong sales of toys — the brand continues to prove one of the top franchises in terms of licensing revenue each year.

Disney plans to expand broaden it into housewares and other merchandise categories the way it’s increased the vast variety of products that feature Marvel’s superheroes.

With them expanding the market, they’re also looking into tossing in some Origin Stories.

Rasulo also noted that one “Star Wars” trilogy film or “origin story film” would also appear on the release schedule each year, starting with the seventh installment in the “Star Wars” saga that J.J. Abrams will direct and Disney releases in 2015.

Not surprising that there would be some “Origin Stories” coming out along with the Sequel Trilogy. A lot of speculation has discussed it being a Boba Fett, Han Solo, Obi Wan, or even a Yoda spinoff. But for those that are skeptical about Disney’s involvement, maybe they’re moving too fast or trying to do too much but Rasulo says

The overall strategy is “to put out a great film” first.

So much excitement is happening but most of it won’t happen til the release of Episode VII which is due to release in 2015.