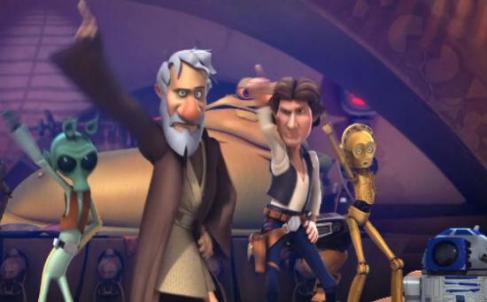 When Disney purchased Star Wars, a lot of the projects that were in the works were placed on hold, and some other projects were revived. One of the many projects that people have been curious about was the new Star Wars Detours comedy. It kind of just fell off the list of exciting things coming out, but Seth Green recently spoke to Movies.com  about the show and I guess it’s not off the menu just yet.

“So there’s actually been quite a bit of talk about this, but Detours is just on hold currently. We have 39 finished episodes and around 62 finished scripts. But that entire show was created before the decision to make more Star Wars movies, so our show (which was created by George Lucas) is an animated sitcom in the world of Star Wars, so we had a lot of conversations with Kathleen Kennedy about Star Wars in not just the next three years but the next 30 years, and when you’re in as privileged a position as we were to be able to work on Star Wars content with its creator, you get a great sense of responsibility to the whole. I was introduced to Star Wars as a child and it was without any ironic or comedic lens, so I saw Darth Vader as scary, and I saw all of those messages very very clearly. We didn’t think it made any sense, in anticipation of these new movies coming out, to spend the next three years with an animated sitcom as three generations’ of kids first introduction to the Star Wars universe.”

So not only is the show still on, looks like they are planning to bring out more than just a short series. Seth also said that the humor that is placed in the show will still be as funny as if they were to release it now. We all remember Robot Chicken, so Star Wars fans can look forward to more classic parodies.