Just a few days ago we posted a twitter pic of JJ Abrams and Kathleen Kennedy at their workshop with R2-D2. We thought that it was odd to see the droid with them and just assumed that he would make an appearance in the new movie. I mean, he’s been in all 6 of the movies so it would be strange to not see him carry on with the new group of heroes. But today on StarWars.com, it has been confirmed that he will be joining the cast, the first of the original cast to be confirmed for the next movie. 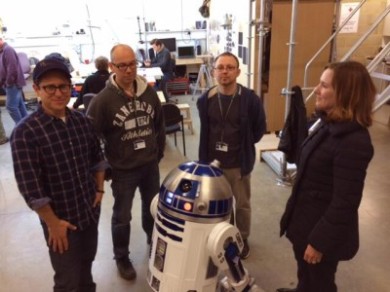 This is the first behind the scene picture for Episode VII.

“It all started when Kathleen Kennedy toured the R2-D2 Builders area at Celebration Europe this past summer in Germany,” says Steeples, who finished his first R2-D2 in 2007, after 10 years of collecting parts and researching. “She posed for pictures with us, looked at all the droids we’d built and was very complimentary. I mentioned that the R2-D2 Builders in the UK were available if required, as a semi-joke. When I was contacted to work on the film by [executive producer] Jason McGatlin, it was on her recommendation.”

So the new R2-D2 is done by fans, which is pretty awesome and they’re working hard to make sure that they can live up to the expectations that fans will have.

“It’s a dream come true,” adds Steeples, “and I hope I can live up to the expectations of the thousands of R2-D2 Builders around the world, let alone the millions of Star Wars fans.”

One thought on “R2-D2 Confirmed For Episode VII”