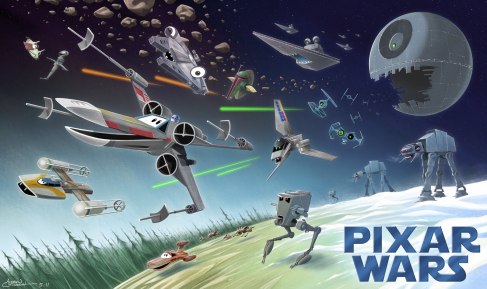 So with Episode VII coming out in 2015 and the new Rebels animated series due to hit Disney XD in Fall 2014, we know that those are not the only plans that Disney has for the franchise. We’ll be having a few spin offs to come out between the film. Now, the latest rumor comes from the rumor factory Latino Review. According to them, Pixar will be getting a slice of the action although nothing has been confirmed.

At this point, no idea what the size or shape of this film will be and given the long-view storytelling production model that is part of the Pixar brand, this could be a long way off. We can expect it to take place in the middle of a Venn Diagram between Star Wars and A Pixar Movie, and what that means to you depends on your definition of both.

So we can expect to see many more rumors/mash ups to come up. Disney has big plans to bring up a new generation of fans so it’s not surprising they’ll try to hit every angle they can.