So we’ve been getting our main cast for Star Wars Rebels revealed, starting with Chopper, and then the cowboy jedi, Kanan. Now our main hero has been revealed at TVGuide.com, and his name, Ezra Bridger voiced by Taylor Gray. He’s only 14 and lives on his own and prefers to work by himself, mostly because of trust issues. Not rich enough to buy his way off of Lothal, he’s kinda stuck there for the time being until he meets the Kanan.

“To survive, instinctively every now and then when he’s in a jam he uses the Force. He doesn’t call it that. He doesn’t know that’s what he’s doing. He thinks he’s got some abilities that are a little strange every now and then, but they help him out. It’s instinctive, it’s reactionary. With Ezra we see how a kid is reacting to this imperial rule. That becomes a big question: What is imperial rule like? We’ve seen it in the movies with a big rebellion that ends up blowing up the Death Star, but do we just assume that when the Empire took over in Revenge of the Sith it was seen as a bad thing? I would challenge that. It wasn’t this terrible thing that came in and was cruel to everyone all at once. It was slow to build its power base and spread out, and then we get to see the rebel alliance it affects, and the repercussions of that tyranny.” 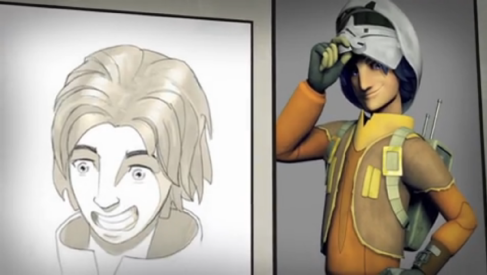