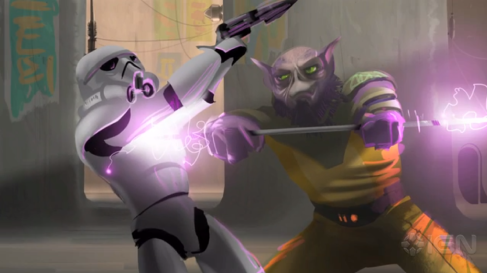 Another character has been revealed today and his name is Zeb, voiced by Steve Blum, who was also the voice of Spike from the anime Cowboy Bebop. Zeb is the newest crew member to the ship Ghost in Star Wars: Rebels. With a military background he is kind of the brute of the group, very hands on when it comes to dealing with Stormtroopers. Him and Ezra begrudgingly work together and squabble from time to time. Zeb is also a new species that will be introduced into the universe!

Dave Filoni says that “he’s not just a dumb thug and was trained to be a member of the honor guard on his home planet who would have been revered for his fighting skills.

Steve Blum: “Zeb has a chip on his shoulder and hates Chopper, can’t stand him even. He is building a relationship with Ezra, begrudgingly.” 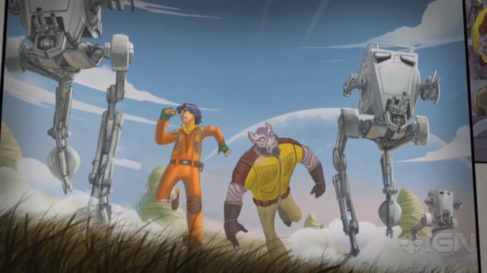 “Zeb actually is pretty articulate and witty and funny,” says art director Kilian Plunkett. “That, juxtaposed with what he looks like makes for an interesting character.”

Blum — who’s voiced Wolverine, Spike Spiegel, Starscream, Professor Galvez and so many other notable characters — is incredibly excited to be a part of Star Wars, recalling, “I remember going to see Star Wars IV: A New Hope in Westwood, CA just before I graduated high school in May of 1977. I was a rebellious (pun intended) teenager who was pretty difficult to impress, but when the massive Imperial Star Destroyer rumbled across the screen, it felt like every nerve ending in my body fired simultaneously. From that point on, I was hooked. 20 years later, I booked my first role on a Star Wars video game project (I believe it was X-Wing vs Tie Fighter) – and have worked on about a dozen SW games since. Every time, even after all these years, I get that intense sensory rush that brings me back to that first moment.”

As for his thoughts on joining Rebels, Blum remarks, “I think I actually screamed when I was booked to play Zeb. It is literally a role of a lifetime. I’ve been lucky enough to play some major superhero roles in my career, but to be given the chance to play a newcharacter in a Star Wars series? Brain explosion. As if working on a Star Wars series – in any capacity – wasn’t enough to cause a grown man to squee, Zeb challenges every acting skill in my arsenal and beyond. His character design is amazing. I get to vocally take on ape-like physical power and abilities, a wicked sense of humor, intelligence and integrity, and so much more that I can’t yet reveal. The attention to detail from the entire production team is inspiring. Every bit of minutia is carefully crafted to satisfy the most discerning fan of the franchise. I’m humbled and honored to be a part of the Rebels crew. I promise I will dig as deep as I’m allowed to give you guys the performance I would hope for as a fan. Get ready, guys. You’re in for one helluva ride.”

So Zeb is joining the crew of the Ghost on the newest Star Wars Animated Series, which will be hitting Disney XD this Fall!