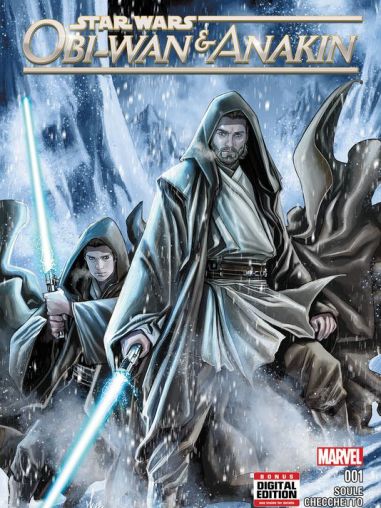 With the old Expanded Universe wiped clean it leaves it open for new and exciting stories to surface. While most of the current canon has been focusing on the original trilogy and tv show in preparation for the new movie, we’re going to be jumping back to the prequels to when Obi Wan first trains the young troubled youth Anakin Skywalker. Written by Charles Soule (Star Wars: Lando) and drawn by Marco Checchetto (Star Wars: Shattered Empire), the comic is to debut in January as a 5 comic miniseries.

“I want people to set their preconceived notions about what an Obi-Wan and Anakin story is aside,” Soule says. “We’ve seen a lot of them but this is something that’s going to feel and look different.”

It’s great to see the beginnings of their relationship as master and padawan. We have seen a lot their adventure when they are older on the big screen and during the Clone Wars, so it’s refreshing to see what it might have been like to train a padawan that may have been too old to begin his path as a Jedi.

Here is the official plot synopsis by Marvel

“Before their military heroism in the Clone Wars, before their tragic battle on Mustafar, and many decades before their final confrontation on the Death Star… they were Master Obi-Wan Kenobi and his Padawan learner, Anakin Skywalker. It’s been a few years since Obi-Wan pledged to train the young “chosen one,” but even as they have grown closer through training, it has been a difficult road. Now, called to a remote planet for assistance, Master and Padawan may be pushed to the breaking point. Writer Charles Soule (Lando, She-Hulk, Daredevil) and artist Marco Checchetto (Star Wars: Shattered Empire, Avengers World, Punisher) bring us a tale of the Jedi at the height of their power…”

The new film is to be released on December 17th!

Keep checking back up as we get more updates and follow us on our social media!