Earlier today, Donnie Yen who was recently revealed to be cast in Rogue One at D23 Expo, had posted a photo to his Instagram that has stirred up some controversy. 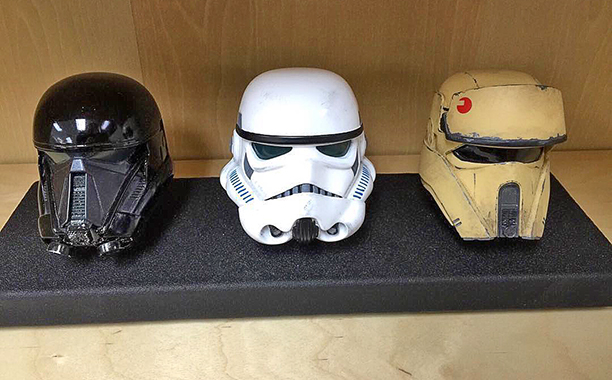 In the center of this photo you can see what looks like a cast of the ANH bucket that we all know and love. However, next to it on each side is a pair of helmets that we have not seen yet. On the left side we see a design very reminiscent of the Republic Commando helmets. Some say it could be a Pre-ANH Shadow trooper. We think this could be another case of recycling materials from The Force Awakens. The helmet looks like it could have originally been a cast of the First Order helmet re-tooled with extra greeblies and such to fit the era. To the far right, we see what looks like a Post-ROTS and Pre-ROTJ Scout trooper helmet. The front of the helmet seems to be reminiscent of the Scout trooper helmets we’ve seen before. Some say it may be a bounty hunter’s helmet or even a helmet used by the Rebel Alliance given the color-scheme.

No matter what these helmets are being used for, we believe it is safe to assume that these helmets will most likely make an appearance in the film at some point. What do you think of these designs? Let us know!

Keep updated with us on Social Media!